The Roland TD-11K entry-level kit ships with 2 cymbals, but – as I’ve shown in a previous article – it can easily be extended with a third cymbal. However, there are some gems in the TD-11 that allows it to add a fourth and fifth cymbal. 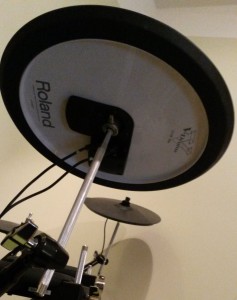 In an earlier post, I’ve shown how to configure an input to provide two completely unrelated sounds when the surface or edge is struck. This feature can be exploited to add more sounds to the kit, by sacrificing the dynamics. To be fair, this article is about adding more sounds, rather than adding more cymbal pads.

By disabling the LINK feature for the left crash cymbal, it is easy to add a second – unrelated – sound to the edge trigger of that cymbal, similarly to how I described adding a cowbell on the bow of the right crash cymbal.

With this setup, it doesn’t matter if I accidentally trigger the wrong sound. By striking the cymbal on the two different zones, I can still produce two sounds that still are noticeable different.

So far, so good. So what about the fifth cymbal? You’ve probably guessed it – use the Ride cymbal input!

As I’ve mentioned, the TD-11 module allows both bow, edge and bell sounds, using a three-zone cymbal such as the CY-13R. By disabling the LINK and reconfiguring the edge of the ride cymbal, it is possible to make it sound as a different cymbal.

I’ve managed to find a position and angle of the cymbal that makes it hard to strike the wrong zone, so I’ve chosen to use the Piggy Cr sound for the edge, which is very distinct and different than any other sound in my configuration.

I decided to use the 20" Custom Rd on the bow, and its corresponding 20" Custom RdB on the bell. But you might as well want to use the Cowbell on the ride’s bow instead of the right crash’s bow – or something completely different!

To conclude: My TD-11K has now been expanded to support playing

And most of this work is done by simply reconfiguring the kit! Quite impressive for a €1.200 kit, don’t you think? And this technique can even be applied to its bigger brothers, the TD-11KV, TD-15K/KV and TD-30K/KV kits, too!

So far, there is a few steps to take before the kit is as large as Neil Peart‘s, but I have some ideas that’s worth trying out in a future article.

But until then, go on, experiment until you find a combination that fits your playing style!

(And for your simplicity, the entire kit configuration is available here)

If you find it difficult to play the cymbals this way, or want ever more cymbal sounds, it is actually possible to connect two pads to one input! By connecting two tom pads to the same input, this leaves one tom input unused. Thus, another cymbal can be added to that input. However, it is needed to create a drum splitter cable.