Creating a drum splitter cable for the Roland TD-11

It is possible to connect more than one pad to an input, thereby (almost) doubling the capacity of the Roland TD-11. However, a standard Y-cable, such as a TRS->2xTS, can’t be used. Instead we need a custom drum splitter cable.

In a previous post, I showed how to create a multitude of cymbal sounds by configuring the edge and bow of the cymbal inputs differently. However, it is also possible to connect more cymbals and pads than the TD-11 is designed for, by using a custom drum splitter cable which connects the head of two pads into one input. This technique works for all recent mid- and high-range modules such as the TD-12, TD-15, and TD-25.

After surfing around a bit, I stubled upon the site Drumsplitter.com, that sells drum splitter cables. However, ordering a single cable from the US, with the additional VAT, Customs and transport fees doesn’t really attract me. Luckily, the cable is quite straightforward to create. I found a Youtube video describing the process. All that is needed:

However, a picture is claimed to tell more than a thousand words, so this is a simplified drawing:

Anyone with a soldering tool and a multimeter can solder this cable. 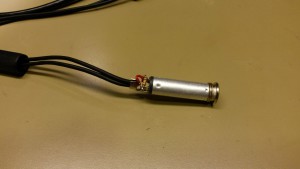 My soldering skills are really poor, but being careful not to burn the plastic insulation around the copper, and using a multimeter to verify that I didn’t create an unwanted shortcut, I had the cable.

In addition, I got the good feeling of having accomplished something.

If you are new to phone connectors, here are some simple guide lines:

After I’ve made the cable, I connected it to the desired input of the TD-11 module. Note that I chose to use a female TRS, rather than a male TRS connector. This allowed me to connect the cable to any input of the TD-11, such as the Tom 1. If I would want to connect it to the Crash 2 input, I would simply use the male-male TRS cable which comes with the TD-11K. 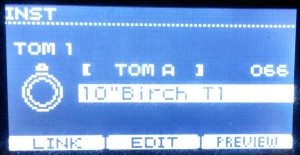 My initial idea was to connect two cymbals to one input using the splitter, but that does not work. The splitter only works with pads. I guess it works with any kind of pads, including the mesh pads, but I haven’t verified that. Of course, you won’t be able to make rim shots on any dual-trigger pad, but for toms, that normally don’t matter.

In order for the cable to work as intended, I – of course – had to disable the LINK feature for the selected input in the Inst menu, just as I wrote about in my previous article Adding a cowbell to the TD-11. After that, I selected two different sounds for the Head and Rim for the desired input. In my case, I connected two single-trigger PD-8A pads to the T1 tom 1 input. I physically located the pads so that the Right pad corresponds to the Rim, and the left pad as the head.

However, I discovered that I had to increase the sensivity of the pads in order to get good triggering. 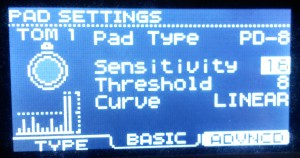 This is done in the System->Pad Settings->Basic menu, by increasing the Sensitivity value. You might also need to adjust the Threshold value. Go ahead and experiment until you find a good setting.

This worked out well, and since I recently bought an old TD-3K kit for the sole purpose of using its cymbals, so I had a few PD-8 dual-trigger pads to spare. Thus, I made a second cable and attached two double-trigger PD-8 pads to the T2 tom 2 input. This left me with the T3 tom 3 input unused, so I attached a CY8 cymbal directly to it.

Now I had expanded my TD-11K to a reasonable size. Four toms and four cymbals. Quite neat, don’t you think? 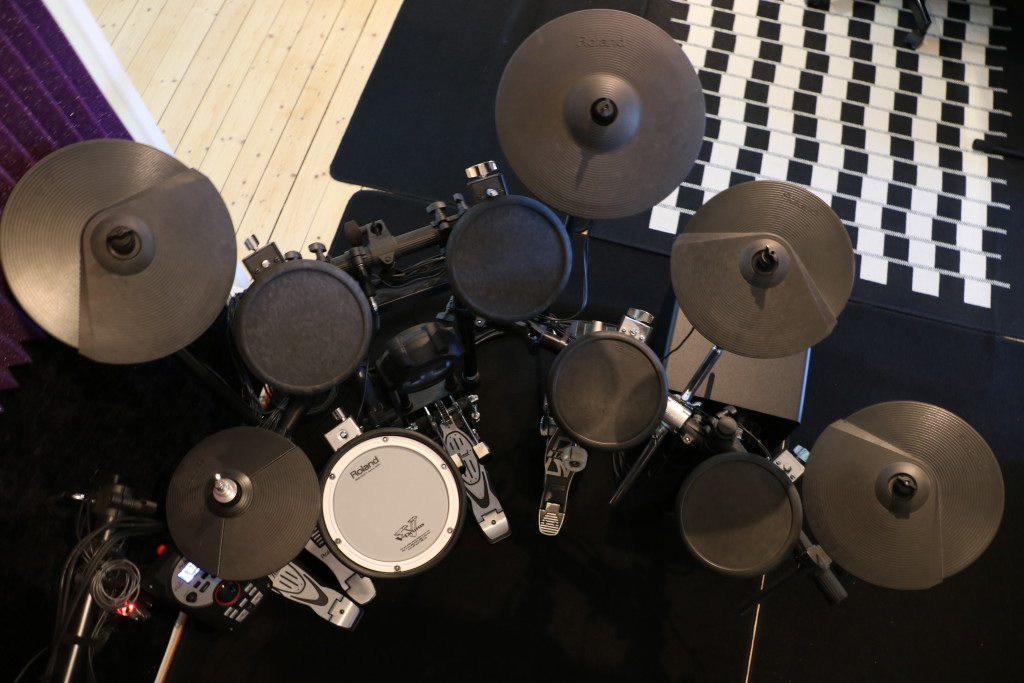